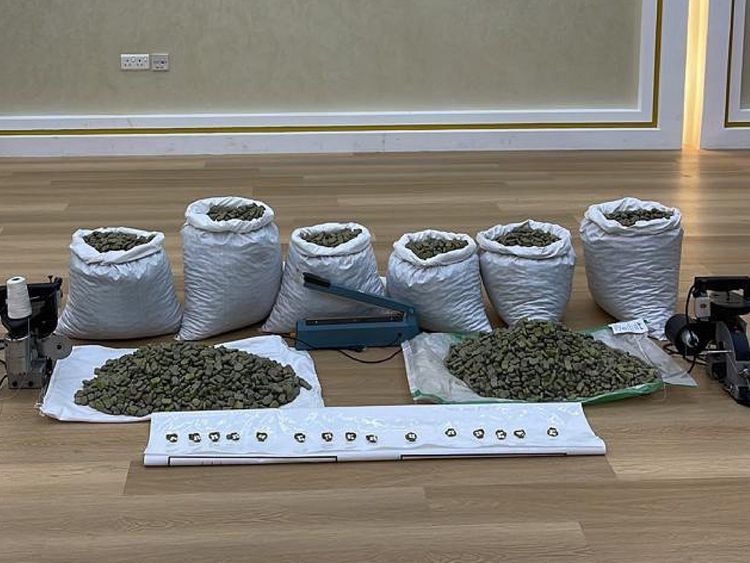 The brave, highly skilled officers of Dubai Police have recently dismantled an international drug trafficking network and revealed the culprits’ secret methods in smuggling the harmful toxins after only seven hours of receiving the report.

The General Department of Anti-narcotics at Dubai Police received a tip-off about a drug-trafficking gang attempting to smuggle drugs in 280 packaging bags (5.6 tonnes) filled with a mixture of natural and plastic broad beans stuffed with narcotics.

As the investigation team was on the suspects’ tail, at the zero hour, they raided their den, arrested the six culprits red-handed, and extracted 436kg of toxins from the legumes.

The Dubai Police General Command confirmed that the Force spares no effort to all attempts to smuggle and traffic drugs. All security measures and procedures will be taken to foil and disrupt their criminal schemes.

The General Department of Anti-narcotics has received a reliable tip-off, reporting a drug-smuggling attempt initiated by an international syndicate, whose few members reside within the emirate while others operate without. The report indicated that tons of illegal substances were hidden in legumes shipment and stored in one of the warehouses.

Upon receiving the information, the Dubai Police formed an investigation team who kept the suspects under close surveillance and located the warehouse in question, where a large amount of board beans had been hidden.

At the zero-hour, the raid took down the suspects and uncovered the narcotics stuffed in plastic legumes, which were ready to be shipped to a nearby country.

Officials from Dubai Police stressed that Operation Legumes is one of the exceptional operations that the Force has carried out, especially as the warehouse inspection required high-skilled security and the deployment of a K9 unit to discover narcotics stuffed in plastic food.

“We will seize every opportunity to preserve the local, regional and international security and safety in coordination and cooperation with international counterparts,” “We will protect the communities from drug trafficking and disrupt all the criminals’ attempts,” “We believe that the security-exchange of information and expertise in the drug-trafficking cases with other polices agencies have contributed significantly in increasing the seizers of drugs in recent years,” Dubai Police officials said.