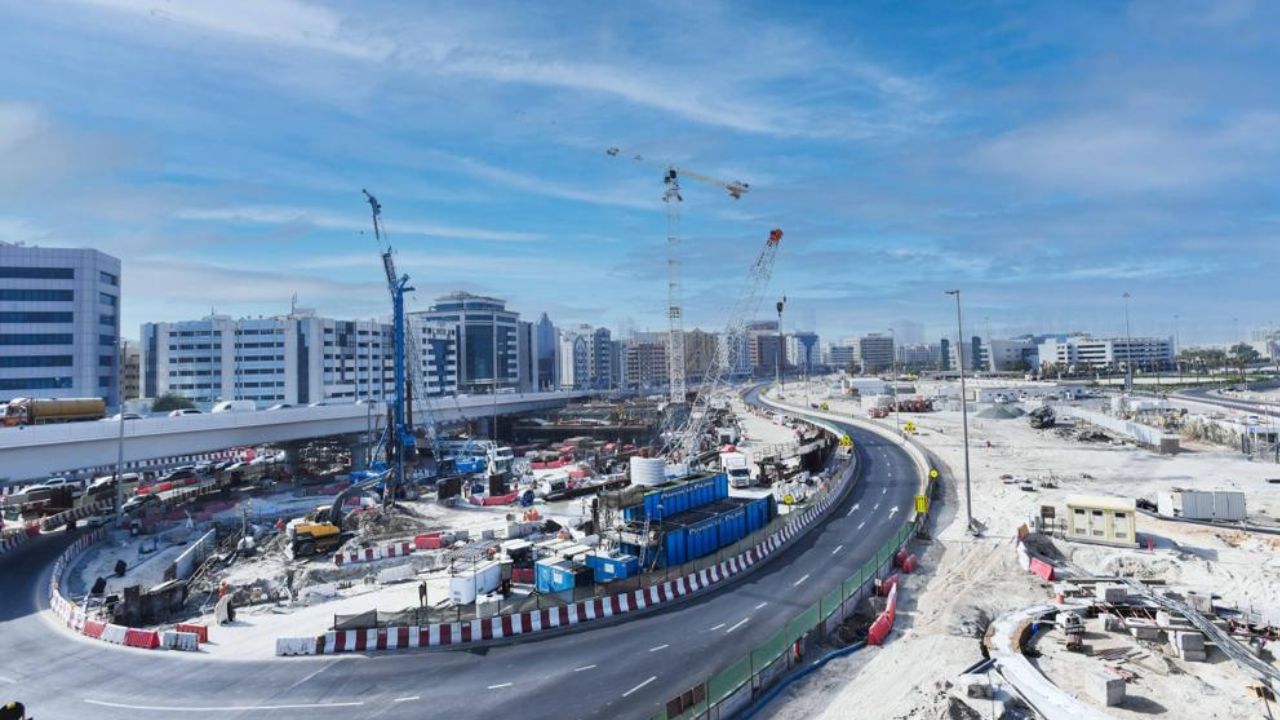 Al Tayer: The project is part of bridges and tunnels extending 2500m

The capacity of the bridges and tunnels will rise to 28.8 k vehicles per hour

Dubai’s Roads and Transport Authority (RTA) announced that 55% of the construction had been completed at the Falcon Interchange Improvement Project situated between Al Khaleej Street, Khalid bin Al Waleed Street and Al Ghubaiba Street. The project links with the Northern side of the Infinity Bridge (Al Shindagha Bridge).

“The project is implemented in response to the directives of His Highness Sheikh Mohammed bin Rashid Al Maktoum, Vice-President, Prime Minister of the UAE, Ruler of Dubai, to develop Al Shindagha corridor to match the extensive development of the area and meet the urbanisation needs in future,” said His Excellency Mattar Al Tayer, Director-General, Chairman of the Board of Executive Directors of the Roads and Transport Authority.

“The contractor has completed the construction works of the main Northern bridge at the junction, the link with the Infinity Bridge and Deira side of Al Shindagha Tunnel, and the link with the improved junctions of Sheikh Rashid Street. 25% of the construction has been completed in the tunnel from Khalid bin Al Waleed Street to Al Mina Street. Construction is underway on the Southern main bridge as well as for the stormwater drainage system. The capacity of bridges and tunnels under the project amount to 28,800 vehicles per hour,” commented Al Tayer.

“The project includes the construction of two bridges along Al Khaleej Street. The first bridge extends 750 m Northwards, and the second one stretches 1075 m Southwards. The bridges are comprised of 6 lanes in each direction with a capacity of up to 24,000 vehicles per hour in both directions. Construction also includes a one-lane bridge extending 250 m for right-turn from Khalid bin Al Waleed Street to Al Khaleej Street with a capacity of 1600 vehicles per hour, and the construction of a two-lane 500m tunnel for left turns from Khaled bin Al Waleed St to Al Mina St capable of handling 3200 vehicles per hour in addition to a surface signalised junction linking Al Khaleej with Al Ghubaiba and Khaled bin Al Waleed Streets. The project includes other works like pavements, lighting, traffic systems, rainwater drainage network and irrigation systems,” explained Al Tayer.

Al Shindagha Corridor Project is one of the biggest projects currently undertaken by RTA. Due to the massive scope of the project, it had been split into seven phases. Six phases are completed namely the intersection of Sheikh Rashid-Sheikh Khalifa bin Zayed Streets; entry/exit points of Deira Islands at the junction of Abu Bakr Al Siddique; improvement of the intersection of Omar bin Al Khattab and Al Musalla Streets with Al Khaleej Street; and flyovers of the Corniche Street, Infinity Bridge, and the slope of the Infinity Bridge, Deira side.

Plans of the project cover the improvements of Al Khaleej Street and its intersection with Abu Hail Street, and the junction of Sheikh Rashid Street with Jumeirah, Al Mina and Al Mankhool Streets. Works also include the construction of bridges stretching 3.4 km, tunnels extending 2.25 km, six surface junctions, and roads extending 5.1 km. Future works also include the construction of southward bridges leading to Deira.