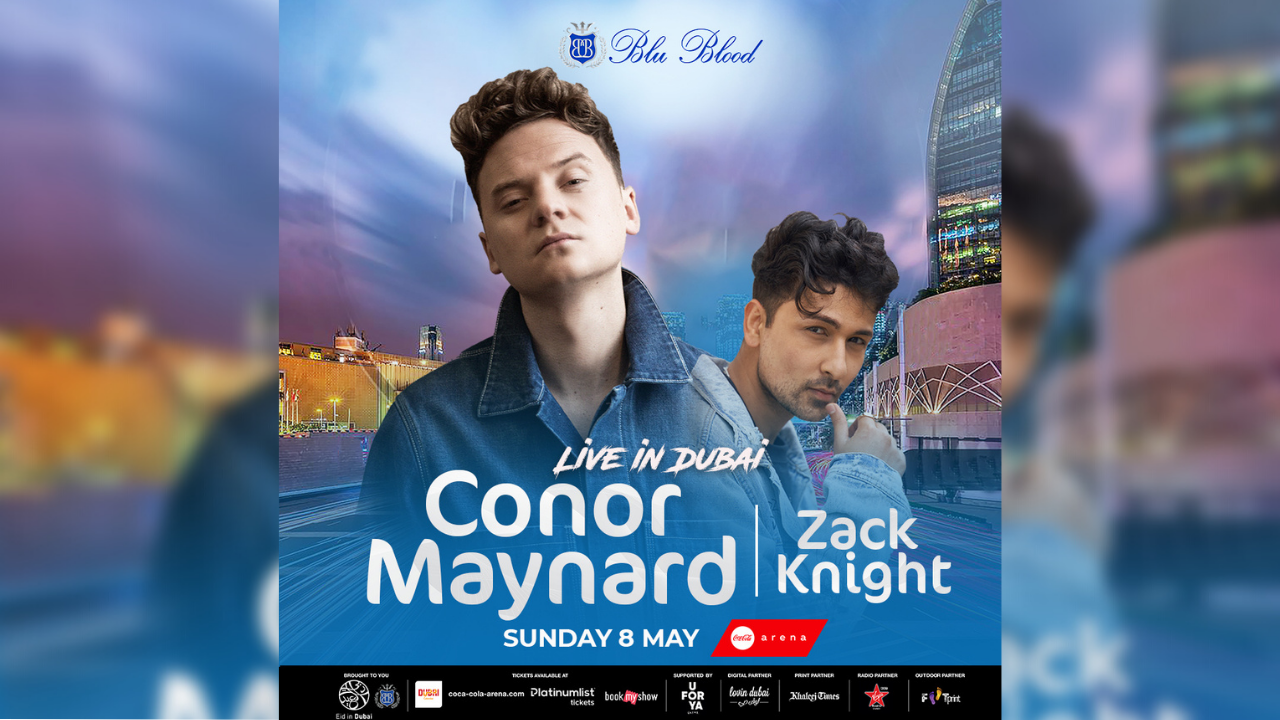 Brought to you by Blu Blood in association with Eid in Dubai, on May 8, at the

Conor Maynard and Zack Knight return to one of their favourite destinations, Dubai, for a one-night-only, not to be missed performance on the 8th of May at the Coca-Cola Arena. This will be the first time that these two fast-rising performers, who were catapulted into international stardom early on in their careers, will share a stage.

Known for his mesmerizing covers and his signature vocal abilities, Conor Maynard needs little introduction.  As a long-time YouTube creator who broke into the mainstream market when he won the MTV Award for ‘Brand New in 2012’, he continues to churn out back-to-back viral videos on his YouTube and TikTok channels, which are nearing 12.7 million and 6.3 million subscribers respectively.  His latest being a re-imagined work of Whitney Houston’s iconic single, “Dance With Somebody” which transforms the chart-topping track into a sombre pop ballad.

Continuing to break new grounds with a global fan base that is growing at an extraordinary pace, Maynard will perform all his fan favourites including: “What I Put You Through”, “Turn Around” and “Can’t Say No”.

Born in North England to a Punjabi Mother and Afro-Asian father (whom he credits as his inspiration behind pursuing a career in music), Zack is one of the UK’s most formidable South Asian singer/songwriters.  He first started out in the industry writing music for household names including Tinie Tempah and Ginuwine but soon came to want his own career.   Knight struck gold when he released his 2017 hit single: “Bom Diggy Diggy” (ft Jasmin Walia). With over 869 million views to date on YouTube alone, the song cemented him as an international superstar – even Nick Jonas from Jonas Brothers fame claims this to be one of his top favourite Bollywood songs.

Describing his music as R&B infused with a crossover sound with Bollywood and Arabian influences, Knight will be performing all his hits including: “Galtiyan”, “Nakhre”, “Gotta Go” and “Thumka”, all of which have received resounding success worldwide.

Dubai’s entertainment power couple, Osman Osman and Shaaista Khan Osman, MD and CEO of Blu Blood share: “We continue to endeavour to bring the very best world-class, show-stopping entertainment to Dubai.  We’re especially excited to bring these two artists out on one stage to be a part of our Blu Blood Experience for Eid in Dubai celebrations.  They both come with exciting energy and incredible stage performances and we know that this show is guaranteed to be one of epic proportions.”