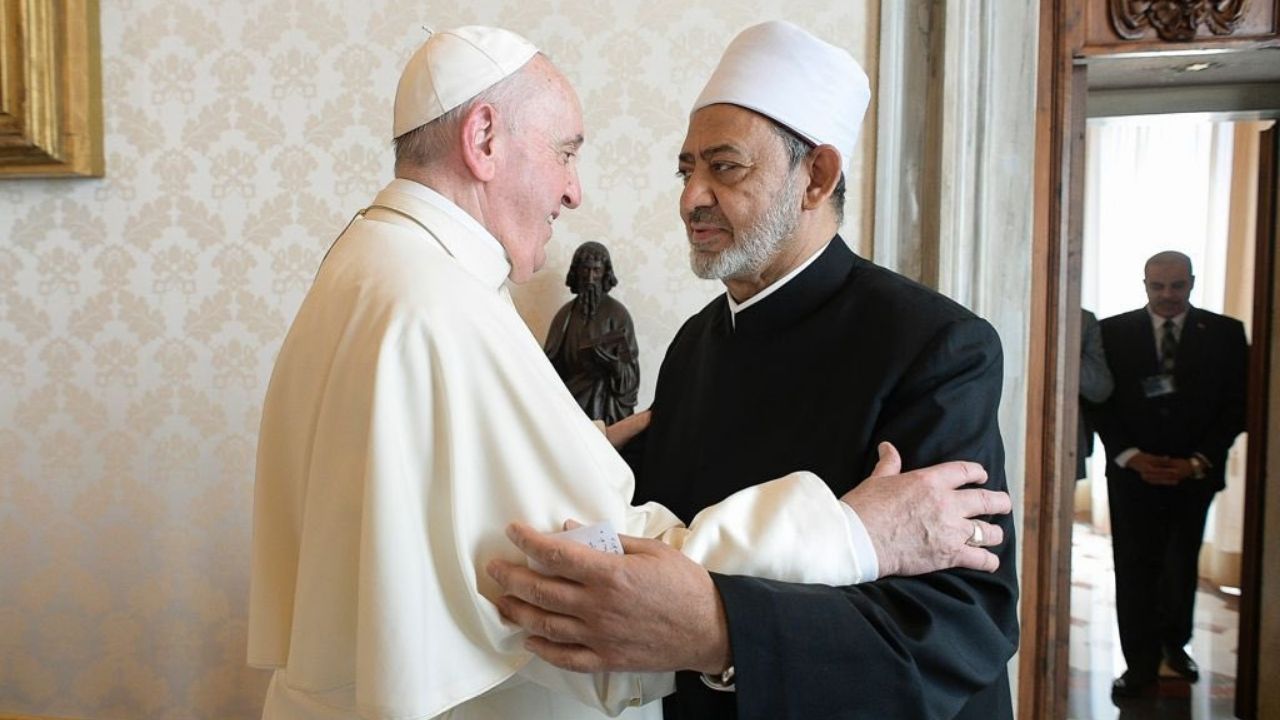 Pope Francis, the Head of the Catholic Church, has asserted that the signing of the Document on Human Fraternity reflects the need to develop fraternity as a shield against hatred, violence, and injustice.

His Holiness’ statement coincides with the International Day of Human Fraternity, celebrated on 4th February by people all over the world, including world and religious leaders. This year marks the third anniversary of the signing of the historic Document on Human Fraternity by His Holiness Pope Francis and His Eminence the Grand Imam of Al-Azhar Dr. Ahmed Al-Tayeb on 4th February 2019 in Abu Dhabi.

Below is the full statement of Pope Francis:

“Dear brothers and sisters! Allow me first and foremost to greet with affection and esteem the Grand Imam of Al-Azhar Dr. Ahmed Al-Tayeb with whom I co-signed the Document on Human Fraternity for World Peace and Living Together, precisely three years ago today in Abu Dhabi. Throughout these years, we marched as brothers with the awareness that by respecting each other’s cultures and traditions, we are called upon to develop fraternity as a shield against hatred, violence, and injustice.

I thank all those who have accompanied us on this path: His Highness Sheikh Mohamed bin Zayed Al Nahyan, Crown Prince of Abu Dhabi and Deputy Supreme Commander of the UAE Armed Forces, for his constant commitment in this respect, the Higher Committee of Human Fraternity for the various initiatives promoted in different parts of the world, and the United Nations General Assembly which, by its December 2020 resolution, made it possible for us to celebrate today the Second International Day of Human Fraternity. I extend my gratitude to all civil and religious institutions that support this noble cause.

Fraternity is one of the fundamental and universal values that should underpin relations between peoples so that disadvantaged people or those who suffer do not feel excluded and forgotten but welcomed and supported as part of this one human family. We are brothers! By sharing feelings of fraternity, all of us must promote a culture of peace, which encourages sustainable development, tolerance, inclusion, mutual understanding, and solidarity.

We all live under the same sky, regardless of where and how we live, of skin colour, religion, social class, gender, age, health, and economic conditions. We are all different, yet we are all the same, and this pandemic proved it. I repeat once again: alone; we cannot save ourselves! Alone we cannot save ourselves! We all live under the same sky, and in the name of God, we, his creatures, must recognise ourselves as brothers and sisters. As believers belonging to different religious traditions, we have a role to play; what is that role? It is to help our brothers and sisters raise their gaze and prayers to the Heavens. Let’s raise our eyes to the Heavens because whoever reveres God with a sincere heart also loves his neighbour. Fraternity allows us to open ourselves to the Father of everyone and find a brother or a sister in the other, share life, support one another, love, and know others.

We all live under the same sky. The right time to walk together is today, not tomorrow or in the future; we don’t know will be. Today is the right time to walk together as believers and people of goodwill. It is an auspicious day to hold hands, to celebrate our unity in diversity – unity, not uniformity, unity in diversity – to tell our communities and societies that the time of fraternity has come. All of us together, because it is essential to show solidarity towards one another. On this day, I repeat, it is no time for indifference: either we are brothers, or everything collapses. This is not a mere literary expression of tragedy; no, it’s the truth! Either we are brothers, or everything collapses. We see it in small wars, in this fragmented third world war, how peoples are destroyed, how children have nothing to eat, how education crumbles… It is a destruction. Either we are brothers, or everything collapses.

It is not the time to forget. Every day, we must remember what God said to Abraham: that looking up to the stars in the sky, he would see the promise of his descent, that is, us (cf. Interreligious Meeting in Ur, March 6th, 2021). A promise was also fulfilled in our lives through a large and luminous fraternity, much like the stars in the sky! Dear sisters and brothers, dear brother the Grand Imam! The path of fraternity is long. It is a difficult path, but it is humanity’s lifeline. To the many signs of threat, dark times, and conflict logic, we respond with the ensign of fraternity, which leads them on a shared path by welcoming others and respecting their identity. We are not the same, no. We are brothers, each with their personality and singularity.

I thank all those who work with the belief that we can live in harmony and peace, aware of the need for a more fraternal world because we are all creatures of God: brothers and sisters.

I thank all those who will join our journey of fraternity, and I encourage everyone to commit themselves to the cause of peace and respond to the concrete problems and needs of the deprived, the poor and the defenceless. The proposal is to walk side by side, “all brothers”, to become real artisans of peace and justice, in the harmony of our differences and respect for everyone’s identity. Sisters and brothers, let’s march together on this path of fraternity. Thank you.”