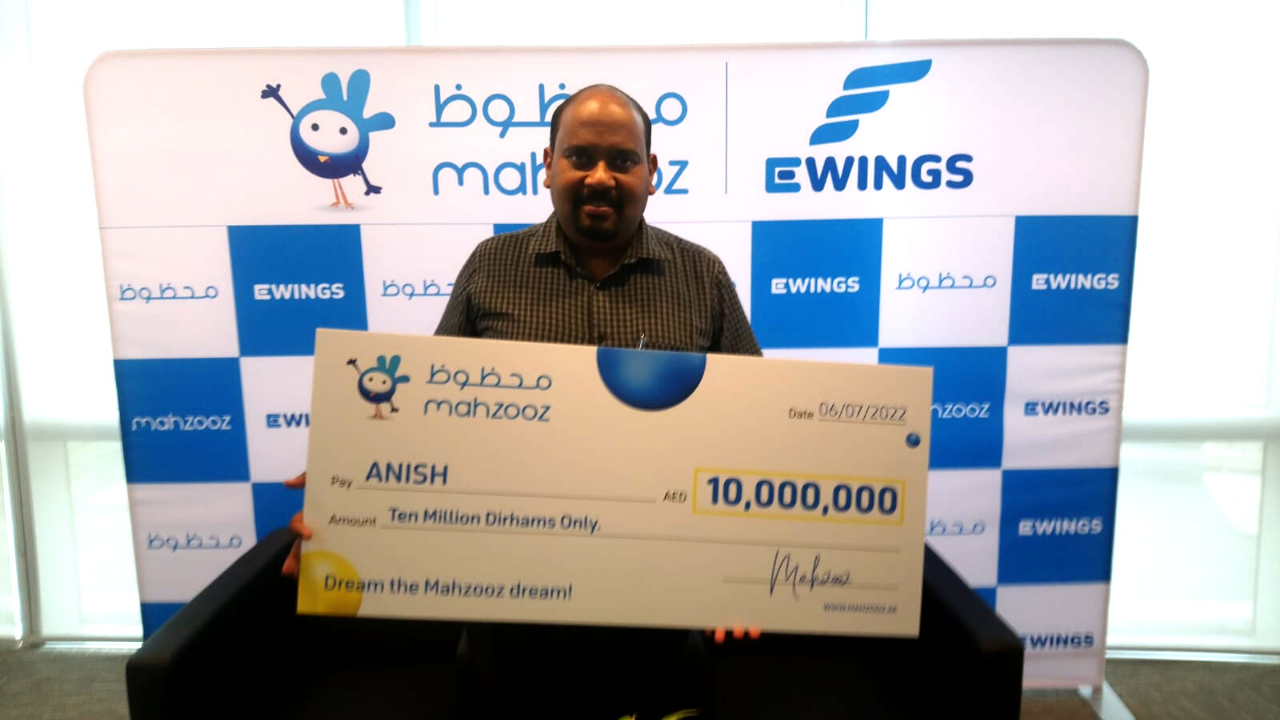 DUBAI, United Arab Emirates: A 39-year-old IT engineer from Kerala in India, will definitely not anymore have to commute for an hour and a half every day to get to work at Dubai Investments Park, after having won Mahzooz’ AED10 million grand draw, a part of which, he said, will be spent to buy himself a car.

“A car. I’ll buy a car,” Anish told a press conference, when asked by Farid Samji, CEO of Ewings, the company managing Mahzooz, about the first thing he has in mind now that he has that big amount of money.

“I am very happy and thankful to Mahzooz for giving me this opportunity,” Anish, who has been in Dubai for 13 years, said.

Anish, the 24th Mahzooz millionaire so far, has also become an instant celebrity at work. “So many people have been taking selfies with me. I have also been getting so many (congratulatory) calls and Whatsapp messages,” he said.

Anish, whose wife and seven-year-old daughter are in India, said he has not made up his mind about the AED10 million. One thing is for sure, he told reporters, he will not quit his job.

“My boss asked me if I will be staying at work. I am not going to retire. My job is my passion,” he said.

Anish said he will discuss his win with his wife and daughter, whom he also will be bringing over to Dubai.

“Right now, I need to plan what I’m going to do. Maybe (invest it) in property. Anyway, I’ll do it in a good way. It took some time for this to (sink in). I have some loans. I want to finish (the loans). Relax, then do what I have to do,” Anish said.

Anish said he initially had the feeling that he has won a small amount. “But when I logged into my account, I was shocked to see that I was the top prize winner. This is a blessing indeed,” he said.

Anish said he will continue participating in Mahzooz draws.  “Surely, I will because (Mahzooz is) helping people (through the raffles),” he said.

Participating in Mahzooz is simple, all the entrants have to do is register via www.mahzooz.ae and purchase a bottle of water for AED 35. For each bottle purchased, participants are eligible for a one-line entry into the Mahzooz grand draw and will be automatically entered into the weekly raffle draw where three lucky winners will take home AED 100,000 each.

Every bottle of water purchased is channeled through Mahzooz’s community partners to hydrate those in need. Mahzooz is inclusive to all who are eligible.

Meantime, Samji said 24 people have so far become millionaires through the Mahzooz draws in a little over two years of operation. It was the 83rd draw that saw Anish winning the AED10 million prize.

“We have given (a total of) AED230 million to 172,000 winners (so far),” he told reporters during the press conference held at the Ewings office in Business Bay.

Samji said Mahzooz will also be giving out gold as part of its “Golden Summer Draw.”

“The celebration does not end here. At the end of July, we will have one more guaranteed winner of a kilogram of gold, as we have just launched a special Golden Summer Draw where everyone who participates in the weekly draws throughout the month of July will get the chance to win a kilogram of gold on 30 July, at the last draw of the month. This will give all our participants an additional chance to win big and live the golden dream with Mahzooz,” he said.