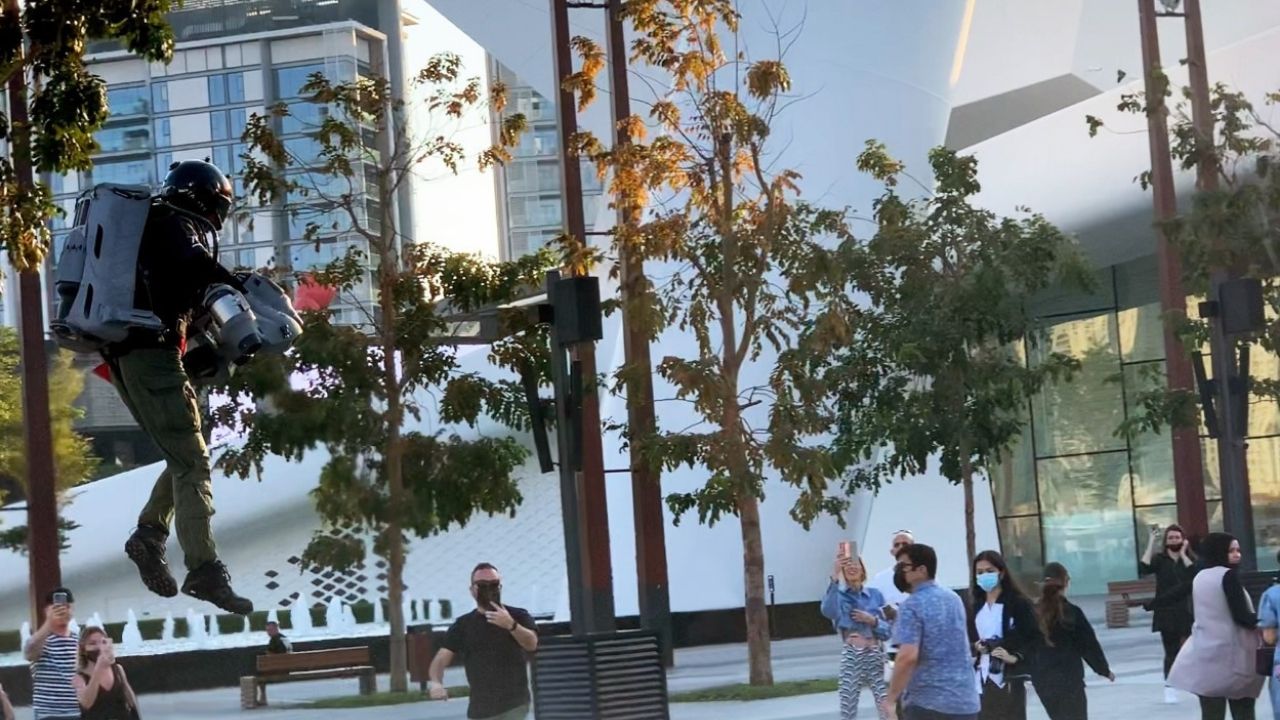 Real life “Iron Man”, Richard Browning, British inventor of the gravity-defying ‘Jet Suit’ has been spotted in Dubai, performing spectacular aerial stunts as he gives away exclusive tickets to crowds to celebrate the opening of the Museum of the Future – billed as the most beautiful building in the world.

Giving visitors a glimpse of the future, the dare-devil inventor, who holds the Guinness World Record for the fastest flight in a body-controlled jet suit travelling at speeds of 85mph (135 km/h) in November 2019, thrilled crowds when he was spotted flying in Dubai to celebrate the opening of the historic scientific landmark.

Onlookers were treated to a spectacle, as ‘invitations from the future’ were handed out, providing people with exclusive access to the iconic Museum, which opens on Tuesday, 22nd February 2022. Crowds were amazed when they spotted the ‘flying jet man’ in the sky as lucky onlookers were presented with the special invitations, which celebrated the opening in a bold, creative and innovative way.

Like Richard Browning’s Jet Suit invention, which also embodies the same vision for technological advancement, the Museum is set to become a hub for scientific talents at regional and world levels. Becoming a global gateway to the future, with its design and latest innovations, the Museum of the Future is also set to position Dubai as a testbed for emerging technologies and an exploration base for talents, inventors and creative professionals from all over the world to unravel the greatest challenges that will shape the future of humanity.

The pillarless iconic landmark, stands at 77 metres tall, and covers 30,000 square metres, featuring a stainless-steel façade being illuminated by 14,000 metres of Arabic calligraphy designed by the Emirati artist Mattar bin Lahej. This makes it the only building in the world that has a surface covered entirely in calligraphy art.

The building, which has also been classified as one of the most architecturally creative in the world, has a hollow middle, forming a human ‘eye’ representing the future we see tomorrow. Inside, visitors will be able to see the latest technologies of virtual and augmented reality, big data analysis, artificial intelligence and human machine interaction.

The Museum of the Future will open permanently from 22nd February 2022 in Dubai and is set to connect thinkers from around the world through highlighting the most important and latest scientific discoveries – proving the sky’s the limit to what humanity can collectively achieve.