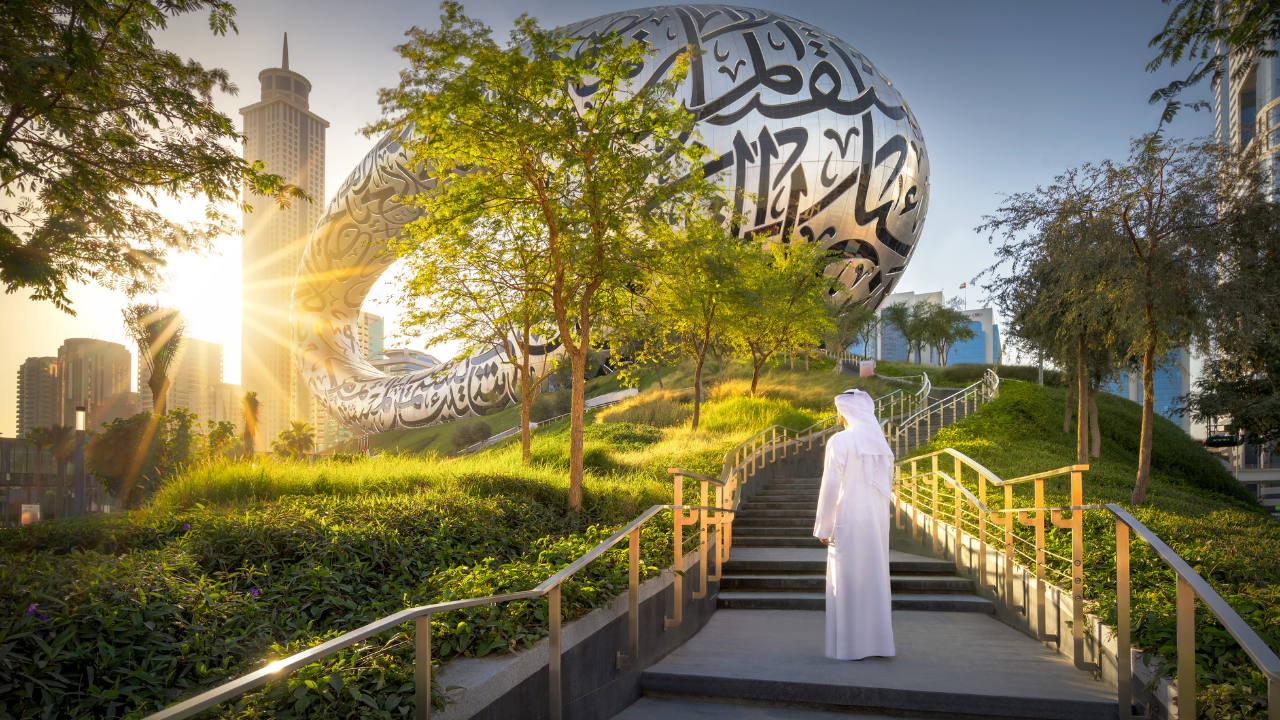 “The future belongs to those who can imagine it, design it, and execute it. It isn’t something you await, but rather create.”

One of three inspirational quotes that you can read when your eyes fall on the façade of the latest masterpiece of Dubai and the world’s architectural Icon, The Museum of the Future.

Written by His Highness Sheikh Mohammed Bin Rashid Al Maktoum, Vice President and Prime Minister of the UAE and Ruler of Dubai, the Arabic calligraphy lines covering the building of the Museum, send a message of inspiration, hope and motivation from the city of the future, to the world.

Through this innovative building, Dubai will provide the world with a cultural and architectural icon, which stands 77-metres tall, embodying an elegant and sprawling calligraphy that expresses Dubai’s approach of innovation.

As a global center to foresight the future and inspire coming generations, the Museum will invite people to participate in imagining and designing an inclusive future for humanity, through its exhibitions and first of its kind concept.

The iconic building, with its unique design, embodies the museum’s vision of pushing boundaries to reach new architectural and engineering horizons. It is a symbol for adopting innovative methods and tools that deploy futuristic technologies to reimagine the possible.

The combination of the building’s architecture and the calligraphy emblazoned on it, have seen the museum become recognized as the futuristic beacon and architectural miracle, being classified as one of the most creative and aesthetically-pleasing buildings in the world.

The artist behind the Arabic calligraphy fonts representing the wise words of His Highness Sheikh Mohammed bin Rashid Al Maktoum, is the Emirati artist Mattar bin Lahej, known  as an innovative thinker and talented artist in Dubai and the United Arab Emirates. The wisdom of Sheikh Mohammed’s words, combined with the distinct artistic approach of bin Lahej, act as a call to the youth to be ambitious in their pursuit of future endeavours, dreams and aspirations.

Commenting on the Emirati contributions to designing, building and managing the first of its kind Museum in the world, His Excellency Mohammed Abdullah Al Gergawi, Minister of Cabinet Affairs, Chairman of the Museum of the Future said: “Emirati talents has contributed significantly to the Museum of the Future… meanwhile their future role in activating and operating this global knowledge hub is essential.”

Mattar bin Lahej said: “The Museum of the Future is an architectural masterpiece and exceptional icon that enriches the urban art in Dubai. The Arabic calligraphy is an art that links our history with our future. The inspiring words of His Highness Sheikh Mohammed bin Rashid Al Maktoum, Vice President Prime Minister of the UAE and Ruler of Dubai, on the facade of the most beautiful building on earth, inspire people and encourage them to imagine the future and contribute in designing it. It is a message of hope, optimism and positivity for a better future for humanity.”

Bin Lahej added: “It is a great honor to be a part of this architectural miracle, which will constitute a beacon to explore new horizons for humanity in the coming years and decades.”

Mattar bin Lahej’s journey to date has come to a point that looks to the future. Though his signature calligraphic style is the one you see inscribed across the stunning Museum of the Future, his work which is also present in the UK, the USA and other locations, adopts various different forms.

For nearly two decades, since 1991, bin Lahej has been on an experimental artistic odyssey of self-discovery, understanding both self- and national identity. Today, as we anticipate the official opening of the Museum of the Future, bin Lahej’s journey stands out as a testament and a calling card to future generations from the nation, and the region, to pursue their passion and aspire to greatness that echoes through the ages.